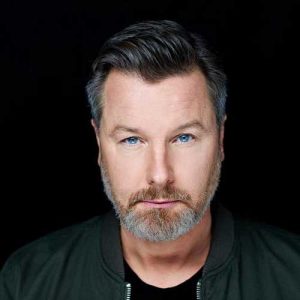 Producer and composer Wessel van Diepen was born on 12th November 1966 in Delft (Netherlands). He was the youngest in a family of 4 children. His parents had a little store in Delft.

At 15 he started his own illegal radiostation called “Radio Stad Delft”. When he was was 17, during a holiday in Wichita (Kansas, United States), he made a radio roadtrip, visiting several stations in that area. In KKRD he met a DJ who gave him the unique opportunity to fill in for him on air for a period of 3 months. Back in The Netherlands, in 1986, he got noticed by 3FM DJ Rob Stenders and through him he got his demo to several Dutch radio-stations in broadcasting capital Hilversum. After numerous offerings Wessel decided to accept a job as a DJ at the VARA Broadcasting Association.

His unique style was quickly noticed by popular broadcasting organisation Veronica. They wanted to recruit him for some radio and TV programms which included the Europe-wide broadcast popmusic TV show Countdonw, which shot Wessel to international fame.

In the early 90s Veronica moguls Erik de Zwart and Lex Harding deserted Veronica and started Radio 538 (nowadays #1 radiostation in The Netherlands), and Wessel ended up going with them. Besides hitting big ratings with a daily drive-time show, he took the opportunity to exploit his dance minded side and created the internationally awarded radioshow “Van Diepen’s Dance Department”, where every notable DJ spinned vinyl, ranging from Oakenfold to Digweed and from Paul van Dyk to Tiësto. When Dutch musicvideo channel TMF (The Music Factory) was launched in 1995 and Wessel got on board, he once again gained tv fame as a VJ with a popular show called “Wessels Woelige Wereld” (something like: “Wessels Wild World”), which he hosted until 1999.

During the 90’s he also started producing hitmusic, together with Denzil Slemming, Peran van Dijk and later Dennis van Den Driesschen (Danski), leading to successful acts such as L.A. Style James Brown Is Dead (he did the trademark megaphone catchphrase himself), Nakatomi (Free, Children Of The Night), and eventually worldwide phenomenons Vengaboys. He also co-produced some Alice Deejay singles. He also contributed to Partners In Crime, Fun Da Mental, E-Motion, Lick, Fire On High… Over the last 13 years, the Vengaboys alone sold over 15 million singles, 4.5 million albums, went platinum in 73 countries and they performed in more than 130 different countries.